TO AUDIT AND FOR INFORMATION ON CURRENT CLASS SCHEDULE INCLUDING ONLINE CLASSES AND PRICES PLEASE EMAIL DOUGWARHIT@GMAIL.COM

Audits are welcome and free of charge. 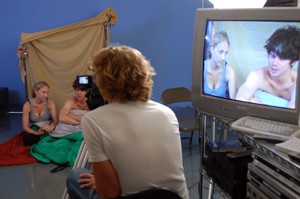 WHY YOU NEED TO WORK ON-CAMERA EVERY WEEK

You are in Los Angeles to act in tv and film. Almost every audition you go on will be recorded on-camera. Therefore it is vitally important to be in a film acting class in Los Angeles that is geared toward tv and film  where you can work in front of the camera every week. This is the best way to become comfortable with the audition process and become aware of any technical issues and limitations that need to be addressed, not only when you are auditioning but when you are actually working on the set with props and blocking. In Doug Warhit’s On Camera acting school in Los Angeles every actor works on-camera every week. Not only is your work recorded but the critique is recorded as well so you can take everything home to review and keep as a record of your progress.

WHAT METHOD DO WE USE?

Method acting is the technique and skill of bringing you the actor to the material in a truthful, personal, and creative way so you can genuinely experience your character’s journey. The goal is to create a marriage of yourself and the character. The three main influences of actors currently working today are Sanford Meisner, Stella Adler and Lee Strasberg. Sanford Meisner focused on getting the actor’s attention off themselves onto the other character by developing the listening skills necessary to create truthful moment to moment behavior. Stella Adler emphasized imagination and physicality inspired by the text. (working from the outside in). Strasberg encouraged actors to draw emotional parallels from their own past to create the character (working from the inside out) engaging the actor’s five senses (working sensorially) to create the character.

Choosing which technique is best is like debating whether to use a hammer or a saw or a screwdriver to build something. Why not use all three? At Doug Warhit On camera acting classes we draw from all of these methods to create a comprehensive technique. We teach you to use your imagination and observational skills to get inside the character; to find emotional parallels from your own life to personalize the material; and to get your focus of attention onto the other actor by really listening and thinking the thoughts of the character.

No matter how talented you are, if you are not confident, if you don’t believe in yourself, if you don’t own the audition space, it is unlikely they will hire you. Actors often worry about making the “right choice” rather than making strong choices that turn them on, serve the material and are fun to play.  They worry they will forget their lines which is a good excuse to keep from fully committing to the character’s life and needs. They worry that someone else in the waiting room looks more right for the role or seems more assured. They worry that they are too tall, too short, too fat, their noses are too big etc. Anything and everything so if they don’t get the part it won’t hurt as much because they were already prepared to fail. You must go in with the belief that you can’t wait to show them what you can bring to the role. When you are waiting to read you are already thinking the thoughts of the character and of the challenges your character is facing. You are no longer wasting your valuable your time in the waiting room comparing yourself to the other auditioners. Through a variety of modalities and exercises including visualization, reframing, meditation, creating anchors and triggers, finding your inner “Meryl Streep,” and utilizing the power of your past successes, we will help you to break free of barriers and self-imposed limitations so you are no longer waiting for “them” to tell you that you belong. We will give you the tools to deal with rejection, procrastination, criticism, the “shoulda, woulda coulda” blues and perfectionism so you can communicate that you belong in that room and you are ready to play.

THE MAGIC OF IMPROVISATION

Improvisation is a very important tool for the actor that we use at Doug Warhit On Camera acting classes in Los Angeles. Improvisation helps you to think on your feet, really listen and play in the moment. The key is to transfer those skills onto the script. There should be no difference in believability and spontaneity, whether you are doing an improv on the material or doing the script verbatim. In each case it must sound like you are saying the words for the very first time and you are really engaged with the other characters.  We use several improvisational tools to reinforce these skills so you aren’t just waiting for the other actor to finish speaking so you can say your next line or listening to yourself while you are saying your lines or worrying that you will forget your lines.

LEARNING DIRECTLY FROM THE INDUSTRY

We bring an industry guest (agent, manager, or casting director) into class at the end of every month so the transition from working in class to auditioning is seamless and demystified. We want you to understand how they think, their preferences, their list of do’s and don’ts, how to handle whatever issues may come up for you in the audition room, how to increase the frequency of your auditions and callbacks and how to deal with the unexpected. i.e. Your agent may have told you only the casting director would be in the room but instead there are five people watching you read; the script may have been rewritten and you get completely new pages when you arrive; they think you are more right for another role and give you new sides when you arrive; you were told to prepare all three scenes but now they are only doing the second one;  you rehearsed standing but now they want you to sit; the casting director doesn’t look at you during your reading; what to do if you accidentally change a word or a sentence during your reading; what to do if you are halfway through your reading and you need to start over.  You will learn to use the unexpected to make your work even more spontaneous and to take adjustments on the fly. Yes you’re in the casting directors office but more importantly you’re also in the place where your character is about to commit murder or the hotel room where you and your lover secretly rendezvous. Your major focus cannot be “I just hope that they like me so my agent gets good feedback.” Of course you want that but that cannot be your primary need in the room. You must believe you deserve to be there; that the reason you are the center of attention is that you are the most important person in that room!

FOR MORE INFORMATION ON CLASS SCHEDULE, PRICES AND TO SCHEDULE AN AUDIT, PLEASE EMAIL DOUG AT dougwarhit@gmail.com.